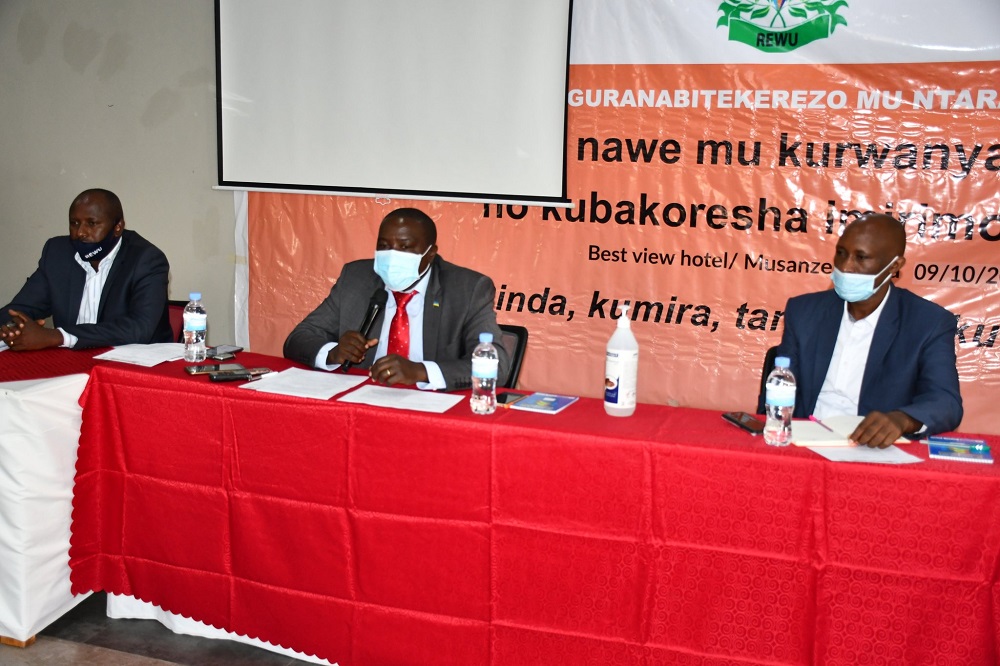 The commitment was made on Friday, October 9, 2020 in the Northern Province during a joint meeting with key players in this campaign.

REWU’s secretary general, André Mutsindashyaka, explained that the reason they organized the five-year campaign is to play a role in the eradication of child abuse and Child labour in all sectors including mining sector.

He believes that the Rwandan society is threatened by the fact that its children are being exploited and they are being denied the rights they are entitled to as children.

“There are raise of GBV cases, and we have found that children are mostly affected family disputes which is why some get exploited in hard labour also child labour like in sugarcane plantations/businesses, in brickyards or sand extraction and consequently they lose right to education for instance,” he said.

“We want these children to be protected from such prohibited activities because tomorrow they will be the ones who will make the best decisions for the benefit of the country.” Mutsindashyaka added

By 2023, the project campaign will contribute to increased protection of children from child labour and sexual abuse with three outcomes such as:

Outcome 3: Improved resilience and hope for child victims of sexual abuse and child labour in communities.

The Senior Operations at World Vision Rwanda, Edouard Musoni says that both child abuse and child labour make them grow poorly and prematurely adding that there are also parents who have deviated from their responsibilities.

He says that some children have taken home responsibilities at a young age, so that there is a need to find tangible solutions to the problem while the government and its partners continue to work together for a long-term solution.

Musoni also said that measures should be taken to prevent child abuse and to punish those who commit such crimes.

It is expected that the campaign will reach and impact approximately Two (2) million children across the country.

The Governor of the Northern Province, Hon. Jean Marie Vianney Gatabaza, says authorities as well as citizens themselves should stand up against child exploitation.

“The children who are raped are mentally affected though are the hope of our country,” he said.

“Once these children become parents prematurely, they are likely to become poor and their families are affected. We are grateful to these partners; we are going to work with other agencies including Rwanda Investigation Bureau to prevent and bring to justice the offenders.” Gatabazi noted

On the issue of children involved in child labour, Hon. Gatabazi says they are going to address the issue starting with their employers.

About 424 pregnant teenagers under the age of 18 have been registered in the Northern Province this year 2020.

Nearly every day in the Northern Province you will find children in sugarcane plantations and others being used in smuggling activities from or to Uganda.

The Governor said “such child labour should stop.”

All districts in the northern province were urged to come up with tangible solutions to child labour and sexual abuse as soon as possible.