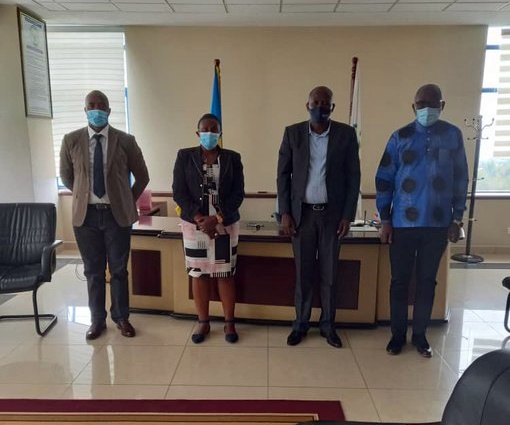 On February 17, 2021, officials from Rwanda Extractive Industry Workers Union (REWU) and the World Vision Representative in Huye and Gisagara districts met with the Governor of the Southern Province, Kayitesi Alice to discuss the ongoing campaign on child protection, the role of REWU trade union in improving employment and professionalism in mining companies specifically in the Southern Province.

During the meeting, the Southern Province Governor commends the Work of REWU and World Vision towards the wellbeing of Children through the campaign that are jointly conducted by the two institutions in close collaboration with local leaders as well as local communities.

REWU has entered into the partnership with World Vision Rwanda through ‘It Takes Every Rwandan’ campaign whose priorities will be to, among others, ensure that child labour and sexual abuse cases are highlighted and punished by law as required; and to advocate for an end to this kind of violence across the nation.

The ‘It Takes Every Rwandan’ campaign, thus, aligns with and contributes to the UN Sustainable Development Goal 16.2 to “end the abuse, exploitation, trafficking and all forms of violence and torture against children”.

Mutsindashyaka Andre, the Secretary General of REWU, explains that REWU has partnerd with World Vision in that campaign mainly based on the fact that REWU was established as a trade union for the rights of the miners, while in this sector there were also a high incidence of child abuse and forced labour which led to cases of School dropout among other consequences.

He added that the campaign is going on in different parts of the country where there are currently setting up Child Protection Clubs in schools in order to prepare children to become activists for their own rights as well as acting as a voice against any form of child abuse.

“There is a lot that will continue to be done in this campaign among them are reaching many children through various training and integration in Child Protection Clubs,” Mutsindashyaka said.

“But this also requires the involvement of everyone from the community to the Leaders. That’s why we meet on a regular basis with the government agencies to help us to make the campaign a success and achieve its goal.” Mutsindashyaka added.

According to World Vision, the overall goal of the It Takes Every Rwandan campaign is to contribute to increased protection of children from child labour and sexual abuse by 2022.