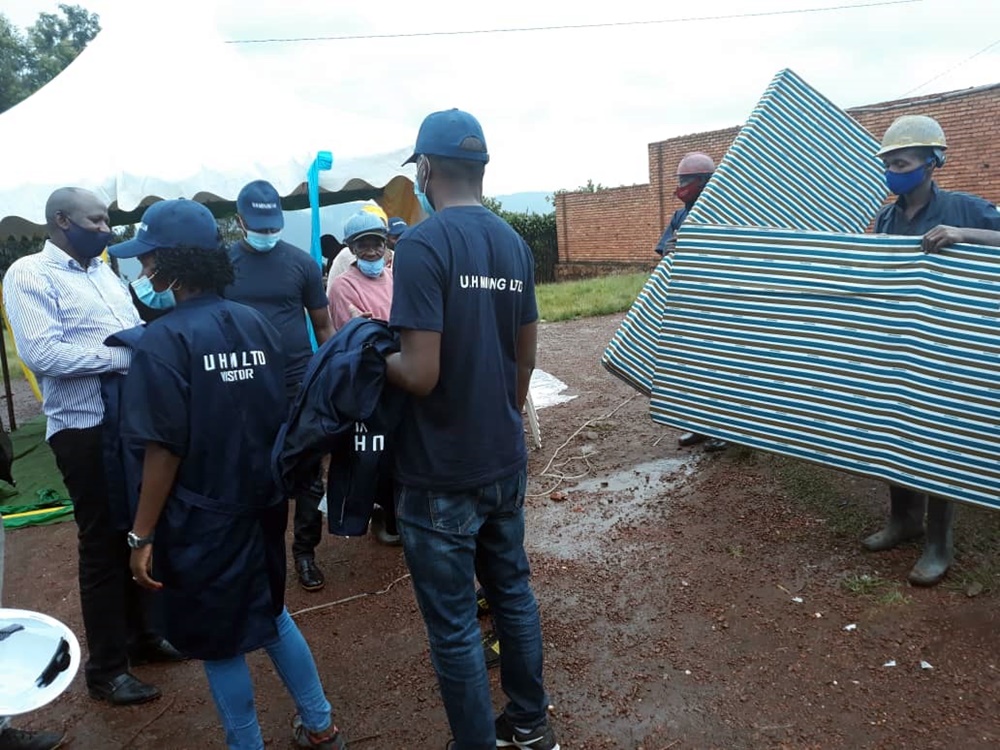 On March 23, 2021, the Mayor of Gicumbi District Mr. Ndayambaje Felix accompanied by various officials including representatives of the Mining workers trade Union visited UH Mining Company to jointly eyewitness the activities of ‘that company, the welfare of the mine workers, challenges and the role of that company in the development of the Community.

They witnessed development activities conducted by the UH Mining Company, among them is the construction of a road that links the community and Mining site as well.

Among the challenges addressed to the Mayor, there is a lack of Electricity at the mining site which affects the company’s productivity.

The mayor praised the courage of the workers and the management of the mine, assuring them of their support and advocacy so that the mine will be connected to the Electricity grid.

After visiting the mine, the mayor of Gicumbi District, along with his companion, continue with REWU in handing over the mattresses to UH mining workers.

The mattresses were handed over to the 117 workers in collaboration with Rwanda foam Ltd and they will be paid in three months instalments as mentioned in the agreements.

In his speech, the Secretary General of REWU, Eng. Mutsindashyaka Andre, praised the cooperation between REWU and the mine management noting that the existing cooperation supports the welfare of the workers to whom also he promised a continuous advocacy as enshrined in the mission of the workers Trade Union.

The Guest honour, Mr. Ndayambaje Felix, Mayor of Gicumbi District, also commended the partnership and good cooperation between REWU and Gicumbi district as well as UH Mining in improving the welfare of the Mining workers, and urged the latter to not only buy the mattresses but also contribute in social security.

He reminded them to contribute their savings in the EJO HEZA Program.