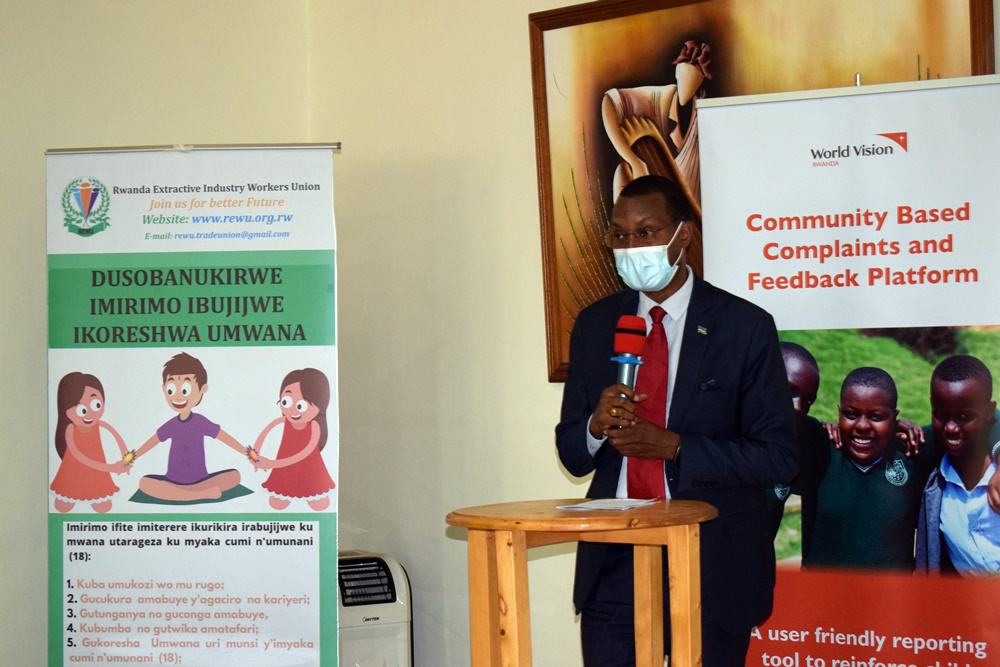 In Muhanga District in the Southern Province, a meeting was held to strengthen prevention measures that will lead to eradication of the problem of child labour and child sexual abuse.

The meeting, held on September 7, 2021, was organized by the Rwanda Extractive Industry Workers Union in collaboration with World Vision Rwanda whose main aim is combating anything that could jeopardize the rights of the Child and promote child’s development in general.

During the meeting, various issues were discussed and measures were taken to protect the child.

In an interview with the Press, the Executive Secretary of the Southern Province Mr. Busabizwa Parfait explained that the meeting brought together stakeholders at various levels and all agreed to work together to find a final solution to the emerging issues that undermine children’s health and rights.

Mr Busabizwa Parfait said: “The discussion revolved around two issues: The first is the prevention of Child Labor, and eradication of Child Sexual abuse.”

“At this meeting we met with various stakeholders including the Rwanda Extractive Industry Workers Union (REWU), including World Vision Rwanda as a Partner, District Leaders, Police Officers, RIB Leaders, to join forces and have a common goal on the eradication of above-mentioned issues that are affecting Children ‘life,

“We came here and we said ‘Let’s take a stand, look at the current situation, and take strong action, as His Excellency the President of the Republic has said, and we must take strong action to end this problem.” Mr. Busabizwa said.

He explained that what has become clear is that often the family problems are behind the incessant child abuse because families whose children have experienced abuse choose to hide the crimes, and “you will find that in most cases that went unreported the abusers are close members of the family of the victims. That should end and we want people to report criminals so that they are brought to justice.”

Eng. Mutsindashyaka Andre, the Secretary General of the REWU, stressed that the meeting was organized to launch a campaign to eradicate child labor and eradicate child sexual abuse.

He explains that the real campaign was organized by World Vision after seeing the state of the problem of child abuse, and then REWU as a partner is working with World Vision to implement this campaign.

The fact that REWU is seen in child protection activities while many think it should be in the field of mining, Eng. Mutsindashyaka says the union has been campaigning against the issue after having experienced child abuse cases in quarries and Mines, where children were being deprived of the right to education and get involved in hard labour such as crashing stones, carry bricks and even some were sexually abused by those working in those jobs.

“Our advocacy touches the families,” he said. “So, we as Government partners are fighting against child labor. As far as we know, unions are in institutions and those institutions are not allowed to employ children. Our special responsibility is to share information with the relevant authorities, be it the security agencies, the government agencies so that those found exploiting children can be punished” he said.

Eng. Mutsindashyaka explains that REWU not only provides information but also advise institutions that are involved in child abuse to desist from such malpractice.

“Here we are also fighting against workers or adults who go to deceive children with the intent to rape them. That is why it is the responsibility of the trade unions in Rwanda, which is why such a meeting is being convened so that we can all work together to find out what the problem is and how to eradicate it completely.” He said.

It was pointed out at the meeting that the issue of not reporting the child abuse is serious.

According to the Director of Rwanda Investigation Bureau in the Southern Province, she called for the establishment of a stable system of information sharing, and called on the judiciary to value the findings of the investigation.

She pointed out that in some cases suspects are released because there was no evidence against him/her.

Here she immediately referred to the issue of DNA testing where it is possible that the child was raped yet his parents immediately washed him so the main evidence is missing but yet the crime has taken place.

It was agreed that this should be addressed in order to eradicate this problem.

World Vision, on the other hand, released a free toll number on any issue related to the violation of the child’s rights, including sexual abuse, child labor and infrastructure demolition, which World Vision is putting in place in favour of child protection.

For example, World Vision builds care centres, schools, and water infrastructure in communities so that children are not travelling long distances alone to fetch water for instance.

The World Vision Toll Number is 7272. There is even a website dedicated to these issues: www.complaints.wvrwanda.org

Dr. Abebe Nigatu, Director of People, Culture and Administration at World Vision Rwanda, said: Our goal is to provide the public with the best possible access to information and ways to provide feedback. We have a team in the World Vision call center that will be recording any case and immediately report the matter to those concerned, but there will also be a follow-up to the victim’s life while the case is being handled for instance if it is based on sexual abuse or any form of child abuse.”