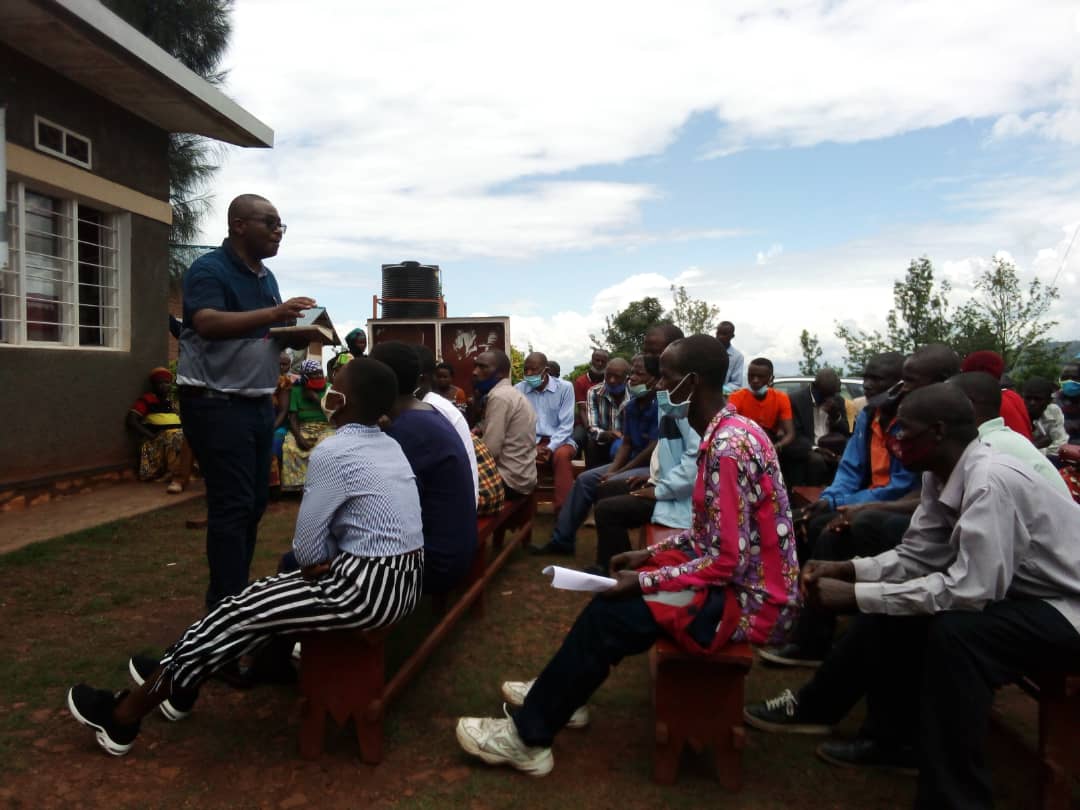 As part of the Campaign Against Child Labor and child sexual abuse, the Rwanda Extractive Industry Workers Union (REWU) in partnership with World Vision Rwanda have conducted a campaign in various district starting 26th April 2022. The weeklong campaign  was organized as part of celebrating the International Labour Day to be observed on 1st May 2022.

In Rusizi district, Muganza sector in Shara Mini market which is located near the CIMERWA factory, the campaign targeted the banana traders where many children are involved in the transportation of these bananas when they are going to be sold!

At the site, we found a large number of children who should be at school, unfortunately they are involved in the banana Trade. Traders have been warned against such child abuse and have agreed that no child will be employed to transport goods again and if anyone found guilty will be punished!

After the sensitization in Muganza Sector, the campaign continued in GITAMBI Sector in Rusizi district where residents were given the same message about the fight against child labor and Sexual abuse!

The campaign in Muganza was carried out by REWU, World Vision Rwanda with the participation of various leaders including V/Mayor for Economic Affairs in Rusizi District, local leaders including all sector leaders, Representative of the Rwanda Investigation Bureau, Army and Police, Cell executives, Business leaders, all village heads, Isibo Chiefs, friends of the family and health workers, religious representatives and others.

In his message, Mr. Mpakaniye Jean Claude, REWU Project Manager focused on child protection, explaining child labor cases that are common in GITAMBI sector, all forms of child abuse, and all other forms of child labor!

He also showed the effects of child abuse, including stunting, illness, school dropouts, death, and more.

He further identified the lines of communication to be contacted once they meet any case of child abuse including Toll free number 7272 of World Vision Rwanda.

The Representative of RIB in Gitambi sector took the time to explain some of the penalties for child labour and child sexual abuse and how to handle cases when offenders are under 14 years old!

Ms. Alice from World Vision Rwanda also took the time to request parents to do everything possible to protect the child from any form of abuse!

In Nyamasheke district in Cyato sector, REWU volunteer spoke to the residents about child labor and reminded that child labor is punishable by law.

During the campaign, some of the children in the Child Protection club also informed that their peers have dropped out of the school and appeared in various labour services. There was also a meeting with the community to discuss child protection.

In BISUMO cell community meeting, REWU Volunteer talked to the community and told them about child abuse, especially child labor and the effects of child abuse, the impact on the child, the family and the country in general.

In Kirimbi Sector, Nyamasheke District, as we campaign against child labor and sexual abuse in Kirimbi sector Where we had planned to conduct our activities, it didn’t not happen as planned due to heavy rain, but we visited a family that has 11 children, including those who are involved in child labor due to the so called “Making a living”.

We went with DASSO and ES of Nyarusange cell and a RYVCP volunteer! We talked to family members, and they agreed that it would never happen again and that because of the information we gave them, they will help us tell the message to the rest of the community!

On April 26, 2022, during a campaign against child labour and sexual abuse organized by REWU in collaboration with World Vision Rwanda, rice farmers in NYIRAGASARI valley in Rusagara cell in Mbazi Sector, Huye District, were sensitized on child labor, the negative impact of involving children in rice farming activities and the fight against child sexual abuse.

After the event, we held a meeting with parents to discuss the issue of school dropouts and those whose children have dropped out promised that next academic year, all the children will be re-enrolled and will ensure that they do not return to the brick making business. The event was attended by the Executive Secretary of the Cell, the Cell Counselor and friends of family.