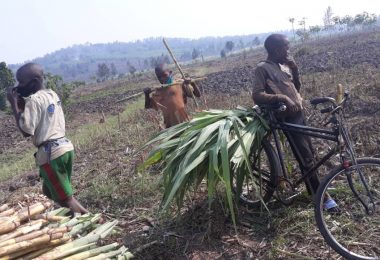 Parents in Nyagatare District in the Eastern Province of Rwanda are afraid of overwhelming effects that COVID 19 will have on their children especially during this time when schools are yet to be reopened.

They said that since March when the Government decided to close schools as part of the measures taken to control the spread of Corona Virus, school children have started to get tired of Staying at Home hence some of them have decided to seek jobs and to involve in Sugar canes trade irrespective the age.

According to Musabyimana Deogratias, Coordinator of Eastern and Northern Provinces in Rwanda Extractive Industry Workers Union (REWU), the growing number of children involved in sugar canes trades and also in brickyard works is a call to all stakeholders in child protection to put more joint efforts in ending such a problem while at the same time looking for sustainable solution.

He said that “Yesterday, I was in Nyagatare to conduct a sensitization campaign on the protection of child from child labour and sexual abuse on community Radio (RBA Nyagatare), and we received information that these days children are risking to face alarming effects of COVID 19 since many of them are no longer resisting to stay at home and consequently they join sugar canes trading businesses as well as working in brickyards”

Mr. Musabyimana explains that after the radio talk show, he immediately went to field to assess the issue on the ground.

“For instance, in Mimuli Sector, based on information we received and again with our field observation, we found children who are under the age of 14 who work in the sugar cane business.” He said.

“They are little boys and even girls. Parents told us that it is very worrying adding that long before COVID 19, the issue was not there because these children had to go to school.” Musabyimana explains.

He added that the issue of child labour is not in Mimuli sector only noting that also in Nyagatare sector there is another challenge of Children who work in bricks making activities.

For instance, he said, “there are still a growing number of children who works in Bricks making activities. However, on the side of factories owners, they always warn that no children are allowed in such activities.”

The Owner of Mutoni Company Ltd which owns a brick factory in Nyagatare sector told Mr. Musabyimana that they always work with local leaders to get rid of all children in such activities.

She said that on their side they keep doing awareness campaigns to prevent reappearance of children involved in bricks making activities.

The campaign, which mostly use RBA Radio Stations and field visits, seeks to end exploitation of children through any form of work that deprives them of their childhood, and interference with their ability to attend regular schools.

In the past years many underage children were found in hard labour activities such as sugar cane trading, mining activities, carrying Heavy objects among others.

However, as campaigns were intensified, the number of cases has decreased comparing to the past.

For instance, Mr. Musabyimana, REWU coordinator in the Northern and Eastern region said that in Mining sector and Sand extraction activities where many underage children used to be found, cases have significantly decreased.

He said that “This was due to sensitization campaign in mining and extractive Industry. The challenge that we are facing today is that some children themselves involve. That’s where you find them in sugar cane trading as well as bricks making. So, there is a need for continuous advocacy and mobilization to remove all barriers that drive children their rights.”

The Law states that It is prohibited to subject a child below the age of eighteen (18) years to any of the following forms of work: forms of work which are physically harmful to the child; work underground, under water, at dangerous heights or in confined spaces; work with dangerous machinery, equipment and tools, or which involves the manual handling or transport of heavy loads; work in an environment which exposes the child to temperatures, noise levels or vibrations damaging to his/her health; as well as to work for long hours or during the night or work performed in confined spaces.